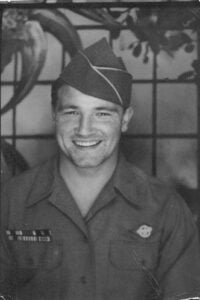 St. Fession was a village about seven hundred yards away, occupied by German forces. We would spot any activity or suspicious terrain, which could be a military dugout, report the azimuth by field telephone which we had strung along the ground linking to our Command Post in the village of St. Omer. When an opposite spotter at another location phoned in his azimuth artillery would fire at the center of the coordinates. We would abandon the house before dark, separate the wire at a place nearer to our trench dugout position at night. This would prevent the enemy who might come in at night, discover the field telephone, listen in on our activities.

CALLING FOR A BARRAGE

We got results one day. It was raining quite heavily, so heavy that the enemy relaxed thinking they could not be spotted in the downpour. They lit fires in their wood stoves inside their dugouts to warn themselves believing the smoke could not be seen. I was spotting. I was amazed to see the total line of their positions! And they were back further from the town then I had ever believed. I called in the azmuth, as did my counter part, waited for the artillery, some trial rounds were fired, and I corrected the artillery until they were right on target, then they began a barrage sweeping the German lines with delayed fuses to explode below ground, the dirt geysered upward forcefully.

On Resurrection Sunday 1945, death was waiting to retaliate against me like a snake using one of our own tripwires at St. Omer. The two GI’s who had wakened me watched me from a distance as I was stumbling along in combat boots not even securely on, half asleep looking for where we had separated the splice on the field telephone the previous night. The trip wire was attached to one of our hand grenades. I hit it. I heard the preliminary “pop” sounding like a “lady finger” firecracker. I was instantly fully awake I took off running fast for almost as many seconds before it was supposed to explode. I dove to the ground, the grenade exploded. The shrapnel made a terriffic noise cutting into trees, bushes, brush and digging at the ground all around me. I was not hit at all, just shook and shaking. Anastasio! Maranatha! Amen. The trip wire was for our own security during the night, and was to have been taken up at the precise time to prevent such a happening, someone goofed, and I could have paid for it with my life.