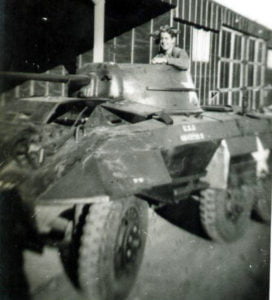 The M8 light armored car was the only armored car used by the US Army in combat during WW II. Originally developed for the Tank Destroyer force, the M8 armored cars were instead used primarily by cavalry reconnaissance squadrons. The M8 did not prove to be entirely adequate in this role, although this was as much a fault of the tactical doctrine as the design of the armored car. A command and utility version fo the M8, the M20 armored utility car, also saw extensive use during the war.

The M8 light armor car stated development in 1941 as a fast tank destroyer. Following he formation of the Tank Destroyer Command in 1940, there was an urgent demand for a mobile 37mm antitank gun. This was temporarily filled by an expedient design, the M6 37mm Gun Motor Carriage, consisting of a 3/4 ton truck with a 37mm gun mounted in the rear bed. It was widely appreciated that his design was far from satisfactory, so in July 1941, the Ordnance department initiated a new 37mm gun motor carriage, intended to be light, fast, highly mobile, with a low silhouette, and suitable to low-cost mass production. The initial requirement called for a 6×4 wheeled armored vehicle with a turreted 37mm gun, a co-axial .30-cal marine gun, a bow-bow-mounted .30-cal machine gun, a combat weight of about five tons.

Early on it became evident that the 37mm gun was barely adequate as an antitank weapon. Much controversy followed, several variants we produced but did little to satisfy those in the Army who felt it was inadequate. The controversy continued into 1942 and 1943 with more variants and testing and eventual entering combat in MTO in 1943-1944 with the 81st Armored Reconnaissance Battalion in October 1943 in Morocco and he 91st Cavalry Reconnaissance Squadron, as well as some Tank Destroyer Battalions.

As the US Army prepared for Normandy the controversy, testing and more variants continued. Despite all of the issues the M8 entered Europe through Normandy and continued to play a role with Cavalry reconnaissance through the end of the war.

A personal story related to me by a 107th C Trooper regarding the M8. As the 107th moved across Germany, he told me it was not uncommon for the towns they were about to enter to have multiple White Flags hanging from windows, indicating surrender. Upon entering the town they would be fired on by German soldiers and because the design of the M8, the Germans would try to toss a grenade into its open turret. The usual response was to withdraw from the town, shell it and then move back in to capture it.
A few photos of the M8 with the 107th from my collection follow. 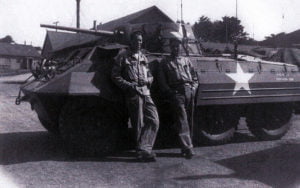 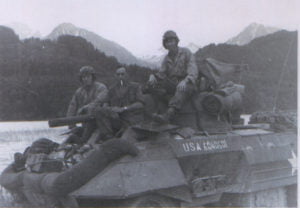 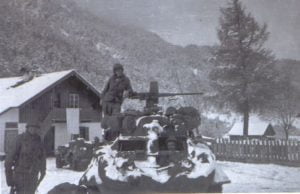 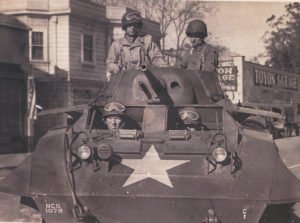 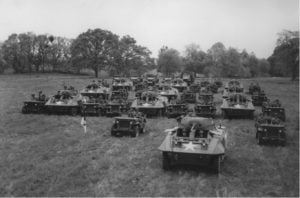